Should Western firms remain operating in or selling to Russia? Can Greek shipping companies continue to transport Russian oil with good conscience after the EU’s decision on an oil embargo? Should Siemens have moral concerns about selling high-speed trains to Egypt? How to deal with the reports around the Xinjiang police files; would Novartis have to close its pharmaceutical office in Urumqi? Is it morally acceptable for tourism companies such as booking.com to continue offering hotels in Myanmar after the 2021 coup d’état?

As soon as firms engage in international business things quickly get morally less clear compared to a completely domestic business model. Often this relates to corruption, but also other questions will appear on the radar screen: How many vacation days should a Danish company (minimum of 25 paid vacation days) offer to local employees when opening an office in Thailand (minimum of 6 paid vacation days)? Can a French automotive company continue to offer Wine at supplier events? Will you send a gay or female sales representative to Saudi Arabia?

Most companies quickly develop coping strategies to balance different moral values and priorities across their different locations. But as soon as fundamental questions around live and death (war!) or human rights are involved, most people intuitively hesitate to just recommend the good old: “when in Rome do as the Romans do.” What to do in such cases? When might it be morally necessary to discontinue international business?

In such situations, two key phases need to be differentiated:

Phase 1 Decision: Is it morally acceptable for you to continue doing business with/in a country with which you disagree morally about fundamental values such as human rights?

To take the decision about dis-/continuation, managers should ask and answer five key questions: 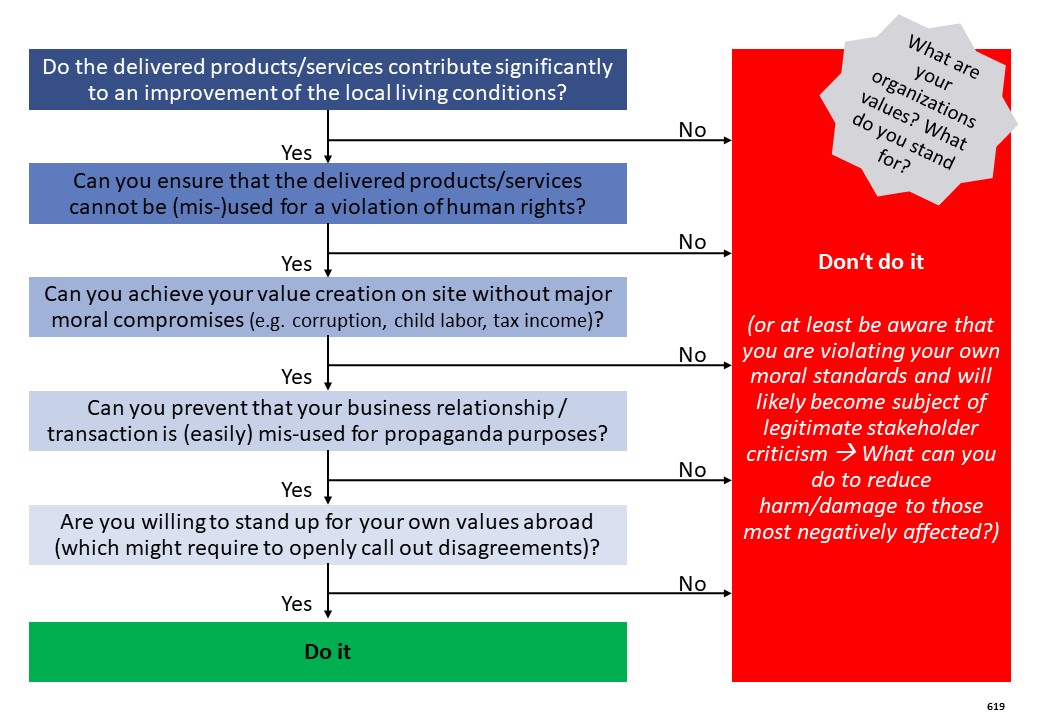 If the answer to one of these questions is “no” you would either have to discontinue your operation or at least be very clear to yourself and your key stakeholders that you are violating your own moral standards. So better be ready to face legitimate stakeholder criticism and constantly ask yourself if there is anything you can do to reduce harm to those most negatively affected.

Phase 2 Execution: Once you have taken the decision about dis-/continuing on basis of the five questions above: How should you implement your decision? Here are six recommendations for the implementation:

When working your way through these questions you will probably realize that the morally right decision is not necessarily always a discontinuation even if the public might be calling you to do so forcefully. Sometimes you might be ethically allowed or even required to continue doing business even with countries in war or with horrible human rights records, e.g. if you provide life essentials (e.g. food, pharmaceuticals, electricity etc.) and can do so in a reasonably clean way. But in many other constellations you will realize that you might need to bite the bullet and shut down parts of your business for moral considerations.

In a recent talk (available in full length at Youtube; see embedded below) Matt Zwolinski, a political philosopher at the University of San Diego, argues that what is usually considered exploitation can at least be perceived to be morally better than the behavior most of us demonstrate in face of catastrophes and emergencies – namely neglect/ignorance/inactivity.

The argument presented by Zwolinski is pretty powerful, especially when considering morality (as consequentialists do) as aiming at the creation of the greatest good for the greatest number (or the minimization of suffering). When looking at cases of exploitation (such as price gouging or the working conditions in sweatshops in developing economies) with a rational, logical perspective, it seemingly is difficult to object to Zwolinski’s argument – even though our moral intuition, our gut feeling and emotions, might clearly say something different: The exploiter does at least provide some value/benefit to the victim of the exploitation, but the inactive people (like ourselves) don’t do anything for them. So how could exploitation be bad but neglect acceptable?

How can we resolve the puzzle? Should we ignore the moral intuition on basis of the rational argument and just move forward by accepting exploitative behavior on basis of the benefits for all involved parties? When looking at the situation short-term this seems to be a compelling conclusion, but I would still tend to disagree: One possible reason to condemn exploitation (and even to introduce legislation against certain types of exploitation, such as price gouging) can be understood to have a social dimension: Through the condemnation of exploitation and through anti-exploitation legislation, we all (and as a consequence entire societies) signal to all of their members that unfair behavior is not acceptable.

In the short-term exploitation might bring real benefits for the involved parties of the exchange (individuals, groups, organizations) – be it the exploiters or those that are being exploited. But in the long-run societies might have a significant benefit, from punishing (through moral despise or possibly even through legal sanctions) the exploiters. To substantiate this point: let’s look at examples of exploitation that Zwolinski doesn’t address: How about black-mailing? Such cases might also bring benefit for all both involved parties, but there are good reasons to morally condemn them and I guess that even Zwolinski wouldn’t defend them.

I fully agree with Zwolinski’s point that neglect / inaction is morally vastly undervalued – and that we should pay more attention to driving people to become active for the benefit of all involved parties. But I just don’t buy the argument, that this would be a good reason to accept exploitation – not even from a normative perspective.

I believe that Zwolinski’s argument against neglect (by criticizing three types of biases) is well substantiated – but there are at least two fundamental problems:

Yesterday I was cycling through Berlin when I made an interesting observation:

In two weeks there will be elections for the state and city of Berlin. Only a few major parties are likely to pass the 5% threshold that is set by German election laws. (Any party that collects less than 5% will not make it into the parliament.) But in addition to the 5 main parties there are 13 other parties competing in Berlin. One of them is a far right wing party called “Die Freiheit” (“The freedom”). They are a party that is at the very far end of the political spectrum and intentionally provoking and polarizing, especially with anti-Islam, anti-foreigner and Euro-skeptic propaganda.

Yesterday they were driving through the streets with trucks covered with banners and their slogans, e.g.: “Kick the overly indebted countries out of the Euro”, “Stop islamistic parallel societies” (a poster with a German flag in the background in which you can find the Turkish symbol of the moon and the star in the red part of the German flag), or “Zero tolerance for criminals”.

Non of this would be a topic for a business ethics blog. But while the big, established and rich parties usually buy (or lease) entire buses and paint them, the party “Die Freiheit” obviously decided to rent trucks. And while they were driving around the city everybody could simultaneously see the party banners — AND the name of the rental company: “LEX Autovermietung” (i.e. “LEX car rental”).

Accidentally, I was on my way to a (different) car rental company. And so I was immediately thinking: Would I rent a truck from a company that also rents cars to political parties that subsequently use the trucks for political advertisement (way outside of the the main-stream political spectrum)? The party is legal and can run for the election. (According to German law there is a [very complex and difficult] process to prohibit political parties if they openly reject the constitution; which “Die Freiheit” doesn’t.) But aren’t their political objectives harmful to the friendly coexistence within the city? Is it ok to rent trucks to them?

On the other hand – if the car rental company was rejecting “Die Freiheit”, should they also reject other parties? Which ones? All? All except for those that are represented in the parliament? All except the one supported by the owner of the company? How about the employees? And if the company decided to prohibit the rental of trucks to “Die Freiheit”: How should they enforce this?

Is there any responsibility of the rental company with respect to their customers’ usage of their trucks? For questions like this many quote the legendary knife producing company and its alleged position of not being responsible if somebody uses their knife to kill someone. Is this true for the car rental company? Are they not responsible for the usage of their cars – especially as long as the usage is legal?

These were some of my questions while cycling to the rental company. And as I was preparing to rent a car myself, I was imagining that the party might have fixed the posters on the trucks while still on the premises of the rental company.

I have to confess: implicitly and subconsciously I was inferring that the rental company supported the party and their political agenda.

Fortunately, I decided to use this situation to blog a few questions on a companies responsibility vis-à-vis the usage of its products / services by the customers. I did a bit of research on the rental company and found an interesting website and coincidence:

Interestingly most of the users / supporters of “Politically Incorrect” are anti-Muslim, and the webpage makes advertisement for the party “Die Freiheit”. But what do we find in this report about the “Muslim demonstration”? A picture of some people speaking while standing on the cargo area of a truck – rented from the very same rental car company – “LEX Autovermietung”!! Not as a big surprise a user called “Rudi Ratlos” leaves a comment (comment 218) stating that the LEX rental car company will be added to his personal boycott list (“LEX-Autovermietung kommt auf meine Boykottliste.”).

So, ironically LEX-Autovermietung seems to be serving two seemingly opposing camps of the political spectrum. What a nice lesson in neutrality and independence of a company…